A couple of unusual things happened today. The first is that I went for a swim; I don’t swim much these days as my orthopaedic surgeon suggested that it probably wasn’t the ideal exercise for a replacement knee and I’m not about to argue with him. The sea here looks wonderful but the beach shelves steeply and there is a strong undertow so it had to be the pool. It was most wonderfully warm to dive into but refreshing at the same time and with every temptation to linger in the water unlike at home. I swam a couple of times and lay in the shade in between but it was soon too hot so we retired indoors.

In the early afternoon I had a massage, a completely new experience for me. Mrs Sixwheeler says I’ve been a bit stressed so we arranged for me to have a head, neck, shoulders and back massage at the resort’s Ayruvedic Centre.

At first the masseur attacked my head with great vigour, to the point in fact that I was concerned that he would rub away the little hair I have left; by way of poking me on the head and in the ears he moved on to neck and shoulders, in each shoulder he found knots like golf balls and worked enthusiastically on them and finally down my back.

This lasted for half an hour by which time I felt both battered and bruised; I was told not to take a shower for half an hour. Walking back to the cottage I probably looked like a drunk, I certainly felt like one. Once back I fell into bed and fast asleep. Waking some time later I still felt distinctly out of focus and was soon asleep again and not really much use for the rest of the day, which is why this blog is being done a day late.

This morning I feel much better, it hurts to raise my arms above shoulder height and I’m glad not to be carrying a rucksack as even the weight of a camera on my shoulder is painful today.

I know a lot of people like these “different” therapies, personally I’ve always been a bit sceptical. I’ve tried this and didn’t enjoy it so won’t be doing it again.

Later in the afternoon I felt well enough for yet another delicious plate of Keralan vegetarian curry so things are now getting back to normal.

Here are a myna bird, lizard and coconut grove to set the scene of where we are staying. 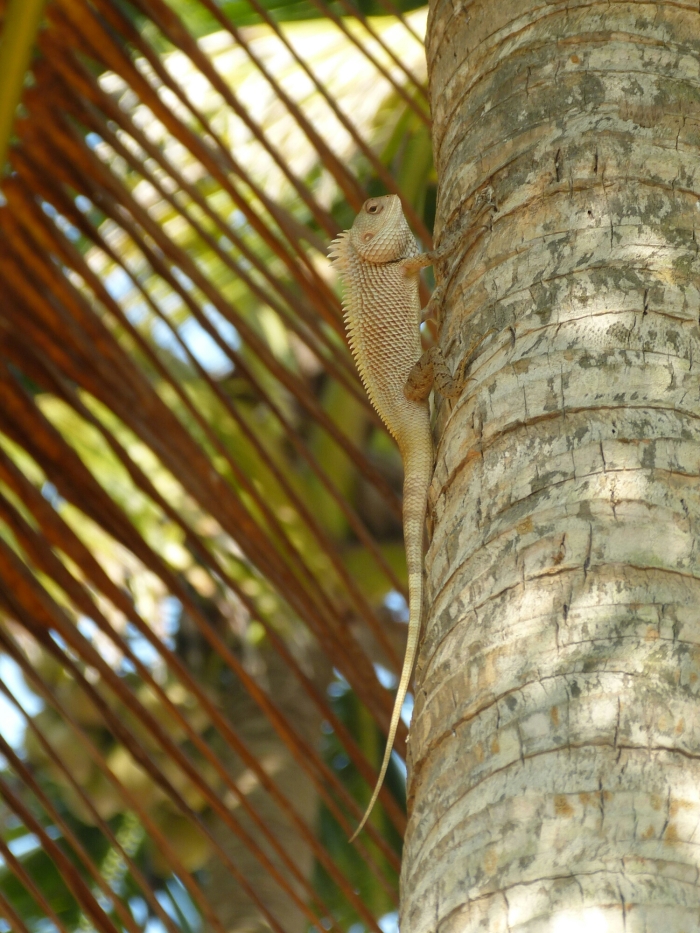