Today has been another simply wonderful day, if I’d packed them I would have worn shorts. In Scotland in March!

I walked along the old Military Road from Kinlochleven towards Fort William. 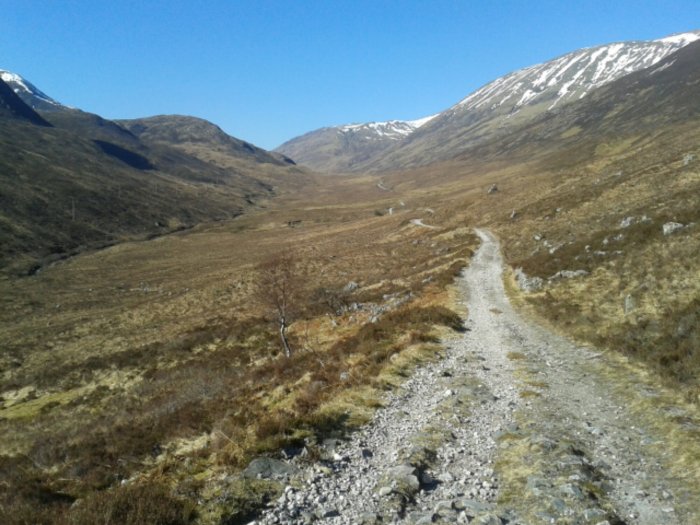 The military roads were built by the English at a time when our relationship with our Scottish neighbours was less cordial than now, to enable the army to deploy around the Highlands quickly. If some of the Scots were getting a bit uppity, such as suggesting independence, a regiment of Red Coats would then be despatched to administer a good slap; and would probably drive off their cattle as well for good measure. Now we live in more enlightened times and they’re still talking about independence!

Some parts of the roads still exist and are in use, the West Highland Way follows the road I walked on today. Along the way I came across this gateway

which covers all options, having a gate, a stile and a ramp for mountain bikers.

I stopped here for lunch

which was a wonderfully sunny and warm spot. The Highlands are full of ruins like this, many have a tragic history from the Highland Clearances while others are just abandoned.

On a completely separate subject, I learnt on Monday that a friend from the climbing club was in North Wales at the weekend with others from his club in the West Country. Whilst descending a fairly straightforward ridge he appears to have slipped and as a result fell to his death.

He was probably the most experienced and competent mountaineer I know and had climbed all the 4000 metre peaks in the Alps as well as climbing in many other parts of the world. He was a former President of the Club and was the current Treasurer of the Alpine Club.

How and why this could happen is one of those sick events that fate seems to throw out from time to time. And it’s something I’m struggling with.