Today has been extra special. Mrs Sixwheeler is tremendously fond of elephants and yesterday’s ride up to the Amber Fort on one was great fun. However today was planned to be much better.

We were picked up by our driver and taken first to pick up a Rep from our tour organiser and on to Elefantastic just outside Jaipur. This is part of a government run “elephant village” where most of the ones taking people up to the Amber Fort reside. These ones are very well regulated and only are able to do five trips per day and are finished by 11.30 and return to their very nice stables where each lives with his wrangler.

On the same development Elefantastic is a private operation set up to give the public a more close hand elephant experience so we had booked a visit. We were welcomed be Rahoul, the owner, who explained the format of the visit, what they are trying to do at Elefantastic and some advice on being around elephants. Rahoul is a fourth generation mahout (elephant wrangler).

Next we were taken over and introduced to Raja 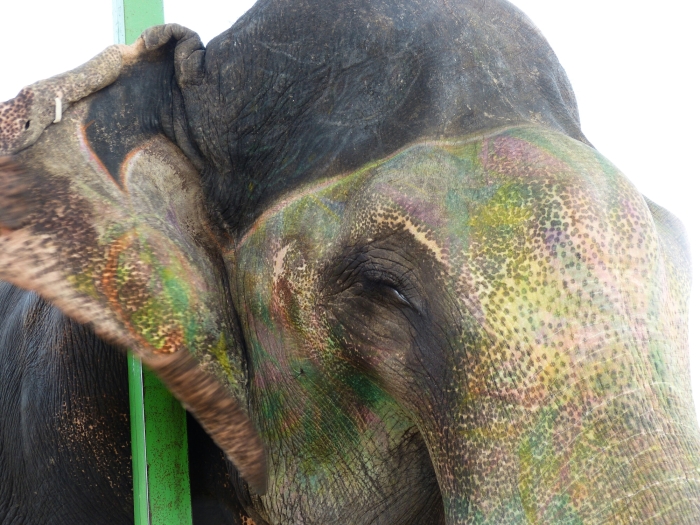 who is a thirty two year old bull elephant who was rescued from a zoo about three months ago. Sadly you can still see scar tissue round his front ankles from where he was kept in chains and he has scars on either side of his neck where the handlers had used hooks on him.

Raja is a big lad standing over ten feet tall at the shoulder and weighing over eight thousand kilos; he eats about three hundred and fifty kilos per day.

We started by helping to feed him and it was fascinating to watch how he placed bundles of fodder up to his mouth with his trunk then his tongue neatly comes up and scoops it into his mouth. 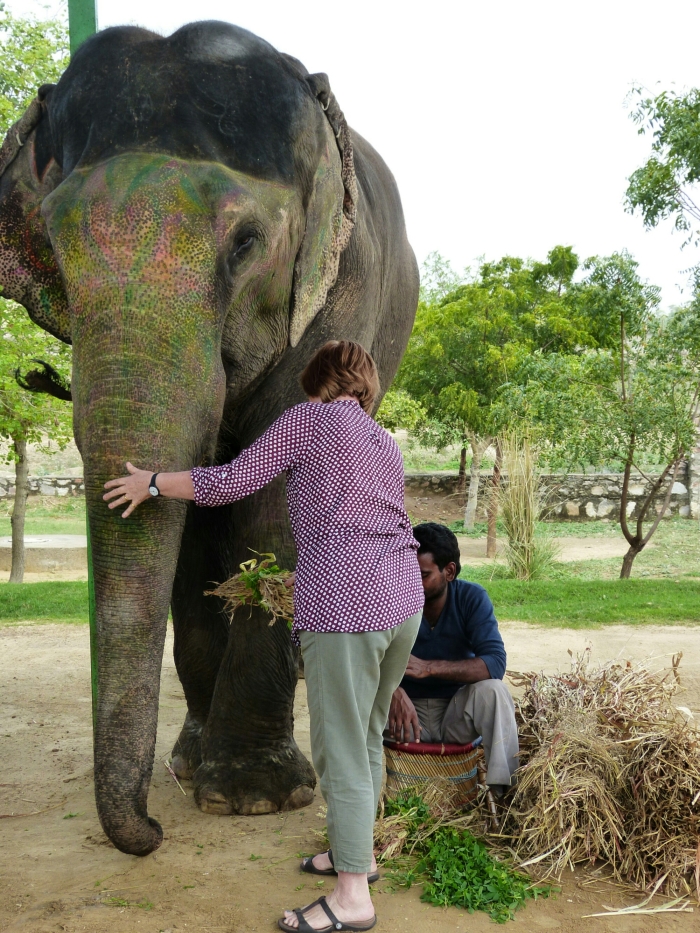 Once all the food was gone they roped some padded mats onto his back and we went for a ride. Riding an elephant astride is an odd experience as he has a rolling gait and by the time I got off I too was walking with a rolling gait! Eat your heart out John Wayne.

Elephants never forget, or so they say. If that’s true I’m glad that there are no mirrors at Elefantastic as next we painted him. Decorating your elephant is a traditional local art form but I’m afraid our efforts were very poor. 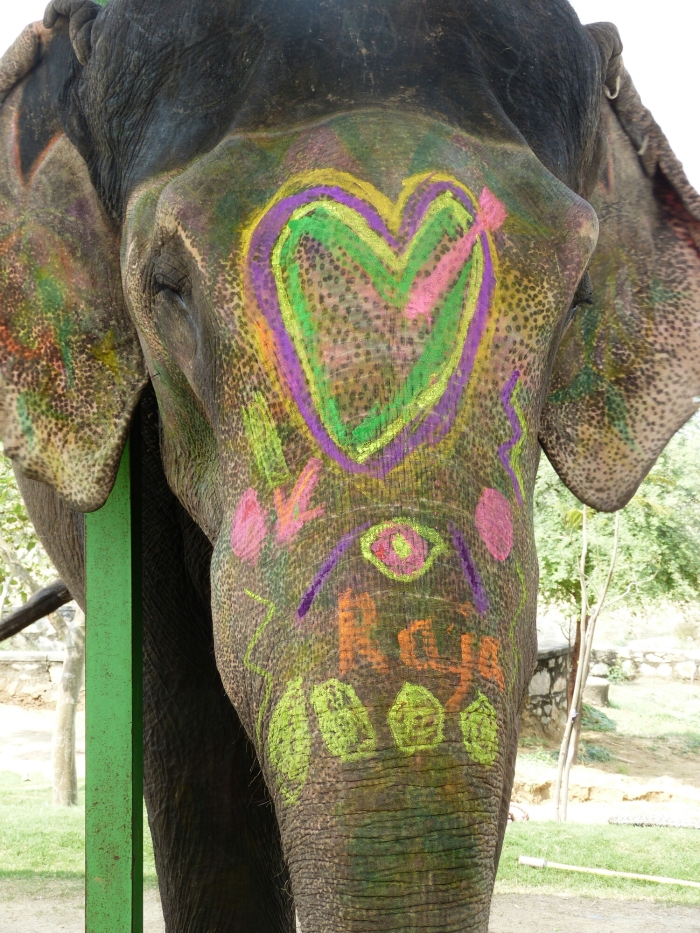 So poor in fact that the only thing left was to wash it all off. But first he needed a drink. For this you aim the water from a hose into the tip of his trunk which he sort of sniffs up into it’s full (about eight litres) then the trunk comes round into his mouth and he blows it all in, accompanied by the most amazing sound effects of gurgles and wheezes. 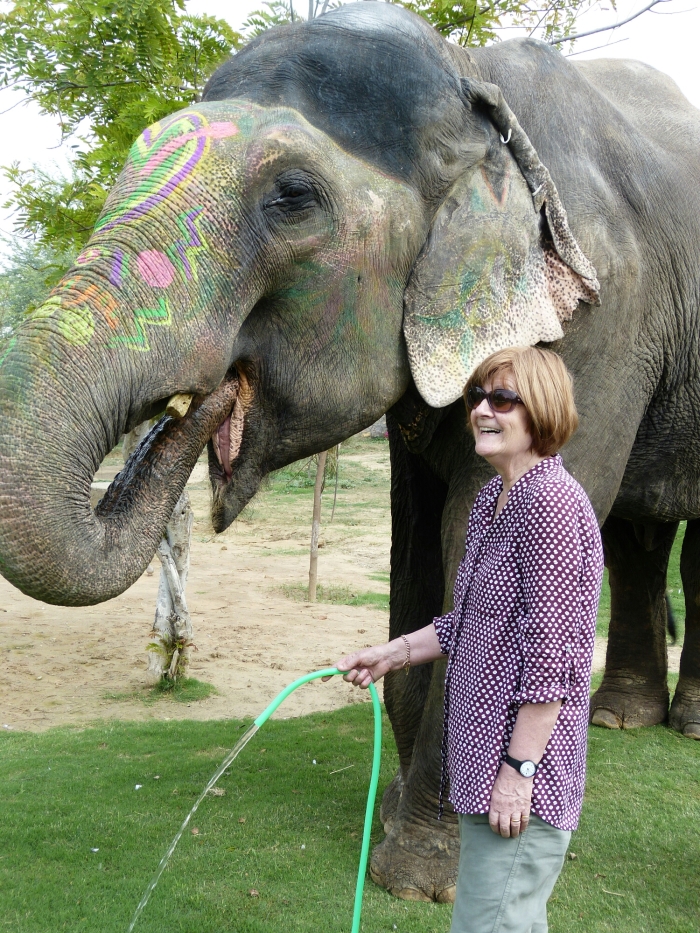 Finally we moved on to the big hose to give him a good soak and to scrub off the paint, which he gave every indication that he thoroughly enjoyed. 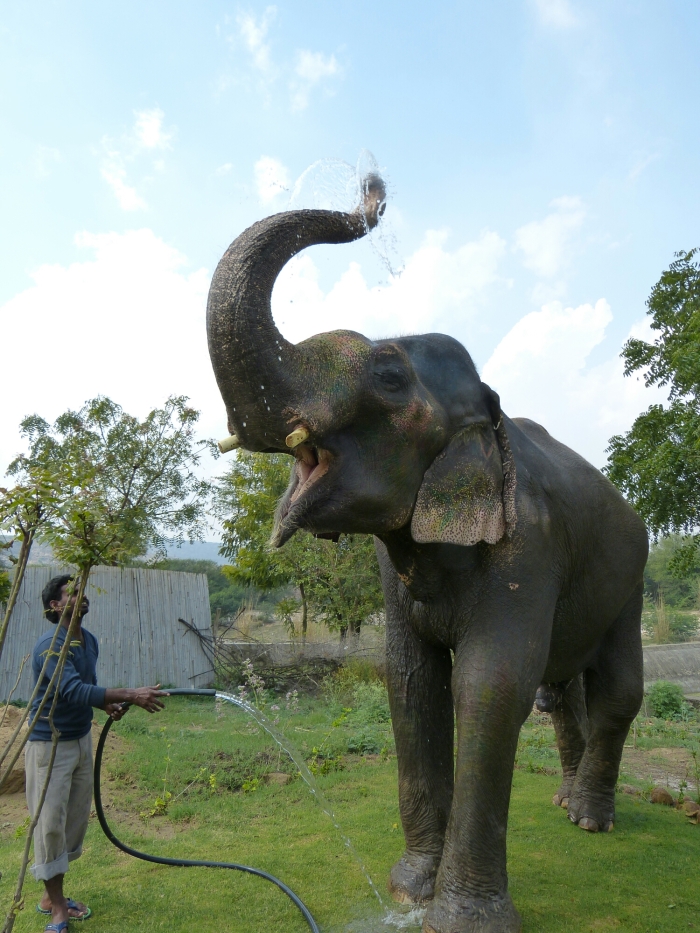 And that was that, I know that its a “tourist” thing but there are real benefits for the elephants; they are very well housed and fed, expertly looked after and get to meet nice people like us who they make very happy. At present out of a total of twenty four elephants, six are rescued elephants which must be a good thing and even Lonely Planet approves of them.

From our own point of view it gave us a wonderful experience which we’ll probably never have the opportunity to repeat; it made Mrs Sixwheeler very happy, it made me very happy and I hope that it made Raja very happy.