After two days travelling we both overslept and suddenly realised that breakfast was about to close. Scoot!

Refreshed we sorted some stuff out and decided to have an explanatory walk into town, as you do, at the hottest time of day. We set off down the dirt road and avoided the open sewer by the main road, crossed over and headed up the hill in typical Indian street conditions with dogs, goats, sacred cows, children, adults, bicycles, motor bikes,  Tuk-Tuks, cars and trucks all competing for the same space and those with horns giving them full use. Phew!

The road takes you gently uphill until you round a bend for the first close up view of the pectacular Jaisalmer Fort.

Only made dogs and Englishmen (and women) go out in the mid day sun and as it was getting a bit warm for us we turned down a side street and made our way back to the Hotel Gulaal for some lunch.

Suitably refreshed we were met by Puri,  our guide, and set off to Gadsisar Sagar Lake for a look. This involved getting Mrs Sixwheeler into a Tuk-Tuk, something she had been loathe to do but all was well. The Lake is actually a man made reservoir originally built to store water for the town but it has been superceded by artesian wells today. It remains a peaceful and romantic spot with a fine arch built to house a courtesan/dancer by one Maharaja. 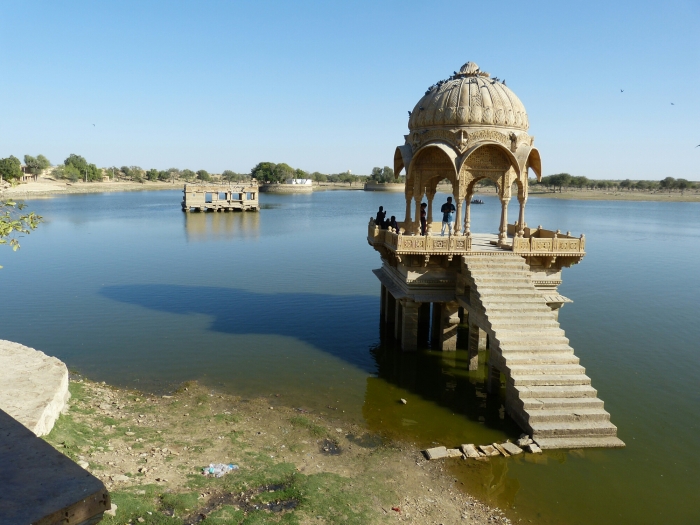 *From this point on the blog will be words only I’m afraid as I’m having a problem loading pictures in from Google Pictures, each one is taking at least twenty minutes. Hopefully someone can help me out. In the meantime I will continue posting pictures on Facebook, Twitter and Instagram. Sorry about this.

When the Maharaja had died his family and other courtiers thought that the dancer had too much influence so set out to murder her but she got wind of this and quickly built a holy shrine on her roof and continued to live under its protection. I do so like smart women!

Following a look round this peaceful place we headed into the town proper to see the famous Havelis. These are heavily decorated family houses built by members of the royal family, government officials and wealthy merchants and are characterised by lavishly carved and decorated facades and balconies and many are quite extraordinary. The first was built by a former Prime Minister who employed two stonemasons who were twins and it was agreed that each should decorate one half of the front of the building but, although it looks all the same, each side is slightly different. There are 160 differences and some are fairly easy to spot but you do find looking for differences becomes quite compulsive. The descendants of the original owner still live in part of the building and we met his great, great, great grandson who showed us round the museum part of the house. And explained how costly the upkeep is and very kindly showed us where we could make a donation.

Next we visited five havelis in a row; these had been built by a powerful merchant for his five sons and had cost in excess of a million rupees when they were built. Mind you he controlled the trade in gold, silver, saffron,spice and opium so he could probably afford it. Today three of them are still occupied by descendants of the five sons and the other two are museums supported by the state.

The centre of Jaisalmer is fairly typical of towns in Rajasthan, narrow streets with houses all hugger- mugger, noisy, smelly, crowded and filthy. “Watch out for that sacred cow”! Frankly don’t come to India expecting it to be like Europe.

Tuk-Tuk back to the Hotel Gulaal for a shower and a tasty dinner in the company of a couple of academics from Kendal (she’s American, he’s German) who are touring India after a three week linguistics conference in Assam.

Tomorrow we visit the fort.