At five past six in the morning it was dark and cold on the terrace of The Tigress Hotel in Ranthambore but we were soon refreshed with hot coffee and toast while we waited for our Jeep to arrive and take us for our second safari drive. When the Jeep arrived we were delighted that we had the same guide as yesterday; off we went into the dawn light heading for zone 3. We were glad that we’d brought lightweight duvet jackets as it was decidedly chilly in the back of an open vehicle.

Dawn arrives quickly in this part of the world and it was light as we entered our zone and, thankfully, the tracks were much less bumpy than yesterday. The early morning light was magical as we drove down to a large lake which glowed in the reflected light of the sky and was completely free from ripples so was like a mirror.

This was an enchanting area and as we drove round we saw the same animals as yesterday but in addition there were some wild boar, fruit bats and crocodiles; some very big crocodiles indeed. We explored several lakes and we’re shown an elegant pavilion dating back to the time when the park was the Maharaja of Jaipur’s hunting park. It stands right on the edge of one of the lakes and the guide told us that now on hot days tigers like to sit on the terrace to enjoy the cooling breeze off the water; quite a role reversal.

Early morning is such a beautiful time of day in the park and we were really enjoying a gentle drive round when suddenly there was a tiger walking along beside us about thirty yards away. I grabbed some pictures as we quickly drove ahead and round in front of where she was headed. We parked with about four other Jeeps as she walked towards us, completely unconcerned by our presence. 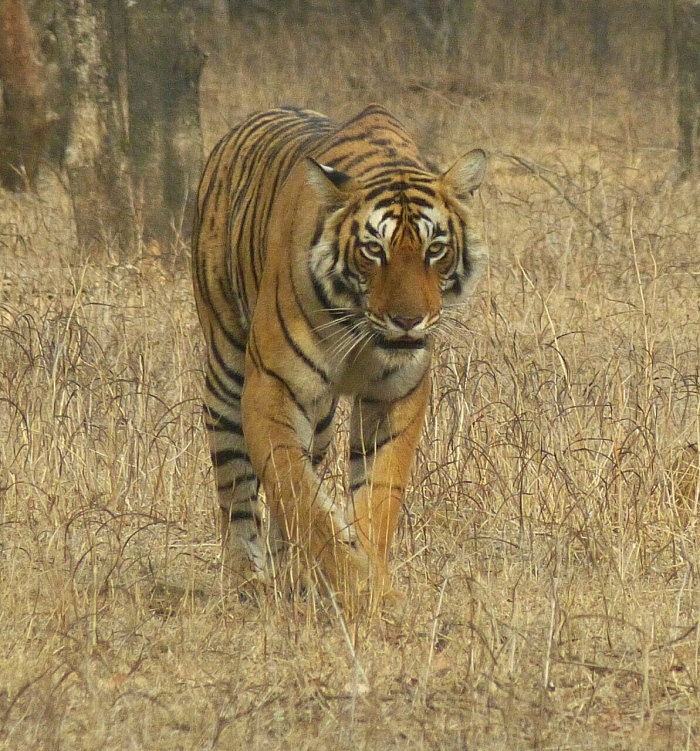 Quietly she sashayed between the Jeeps and just headed into thicker brush beyond us and disappeared from sight. This was such a casual encounter that it was much more impressive than yesterday and the absolute confidence of being top predator was amazing; nothing can prepare you for seeing a tiger in the wild, we’ve been so lucky. For people interested in detail, this female is T84 known as “Arrowhead” because of the marking on her head.

When our tour was over we went back to the hotel in time for a late breakfast, to save time I had my tablet on the table and was downloading the new pictures from my camera. Suddenly one of the other guests spotted the tiger pictures and my bacon and eggs was sidelined as I was surrounded by about a dozen Chinese Canadians who insisted on an impromptu slide show.

After lunch we were due our final safari drive but Mrs Sixwheeler was feeling a bit battered so opted for a massage and some pampering instead, probably not a bad choice.

The same guide collected me and we headed off to zone 4 and from the start he made it clear that a tiger sighting was unlikely but he did say that there was the possibility  (though unlikely) of leopard or sloth bear. In the end we saw neither but we did see a leopard’s lunch in the former of a freshly killed Sambar and some sloth bear footprints. There’s a healthy population of leopards in the park but they are nocturnal so rarely seen in daylight. There’s a wall round the park that is apparently favoured by the leopard’s who use it as a quick way into town if they fancy a (sacred) cow for dinner, or their favourite snack ….. a dog.

I did get to see a red-headed vulture having a meal, a very big, black bird with, you guessed it, a red head. And we also saw something that had never occurred to me, some jackals. And so our visit to Ranthambore came to an end, we’d been amazingly lucky to see two wild tigers – absolutely unforgettable but had seen so many other wonderful birds and animals as well. It’s a pity that some people visit only expecting to see tigers and are blind to all the other things.

Back to the hotel for shower, beer, dinner, packing and bed. We’re heading for Delhi in the morning on our way home.