Well Bayonne has a much more relaxed feel to it, nobody seems to be in very much of a rush at all and that suits me when I’m on holiday. A few overnight showers had cleared but the day started very overcast and with the River Nive in slack water I was able to get a nice moody photo with reflections. 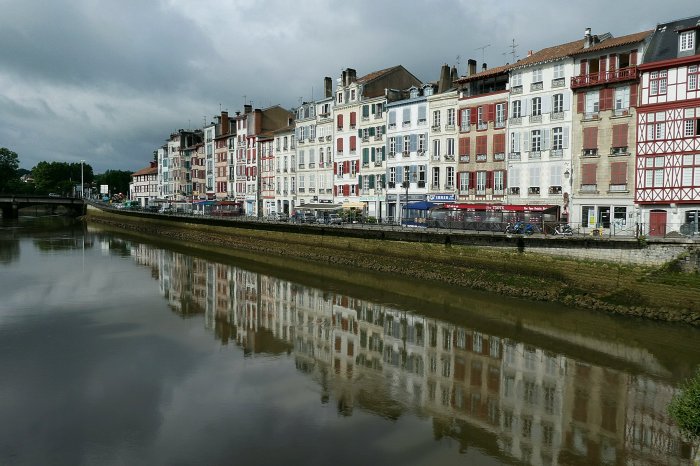 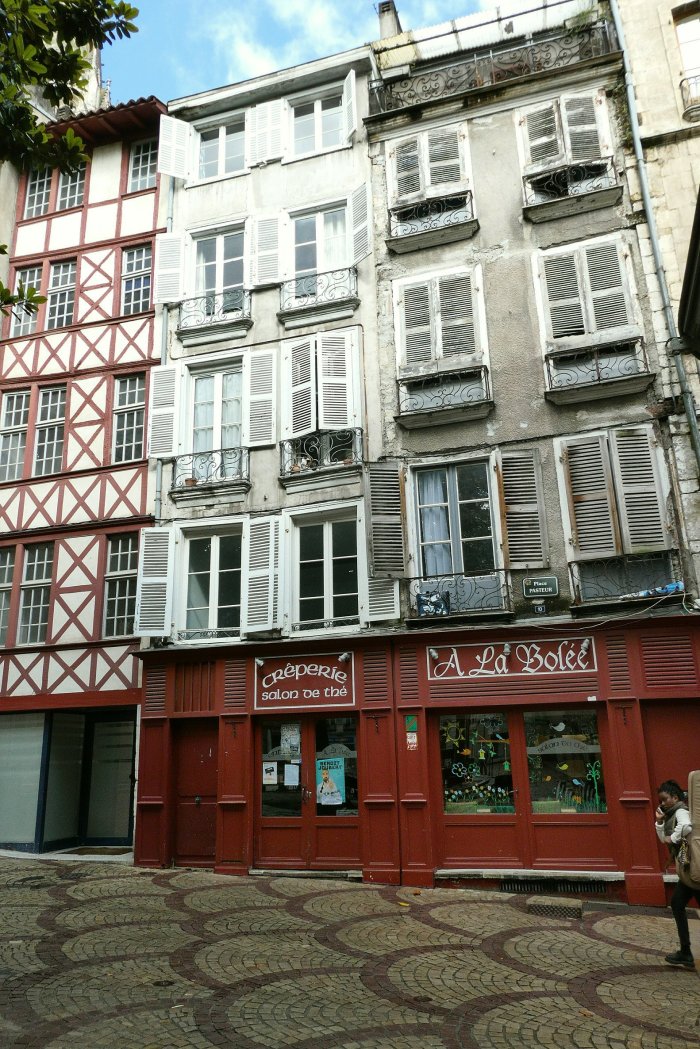 where the locals sit by their windows and watch the world go by. 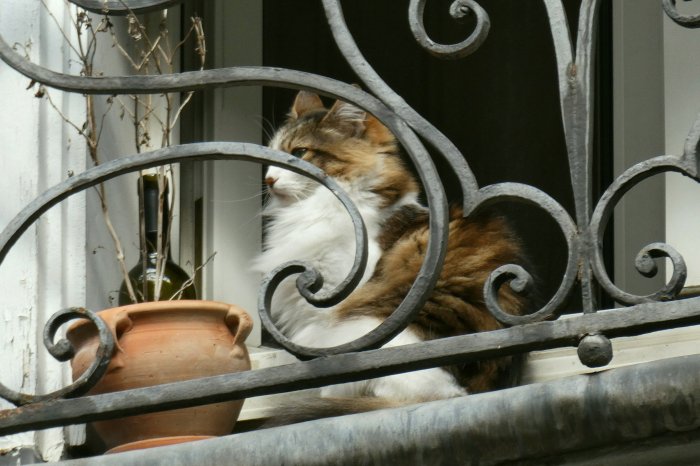 That little square took us up to the Cathédrale Ste-Marie where, on the north door you will find the celebrated “Freedom Knocker”. 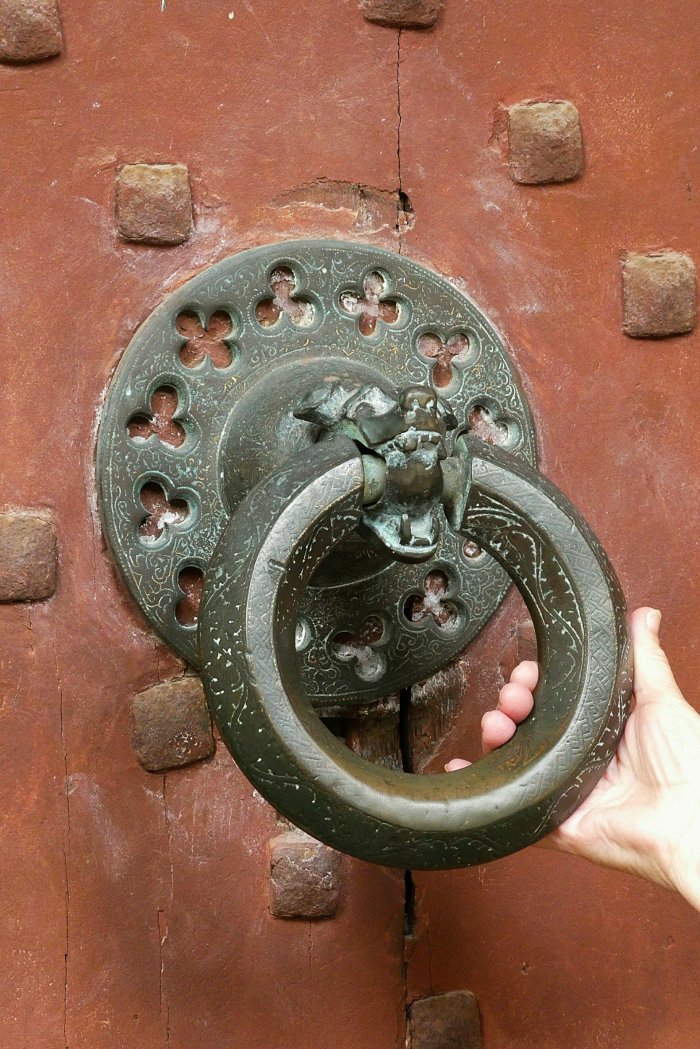 This enormous sculpted knocker dates from the 13th Century when any fugitive criminal who seized the knocker was assured sanctuary within the church. (Source: Michelin Guide – French Atlantic Coast. Hand Model: Mrs Sixwheeler – not a fugitive criminal as far as I’m aware). Inside the cathedral, which is currently undergoing extensive refurbishment, there are some beautifully decorated panels and ceilings 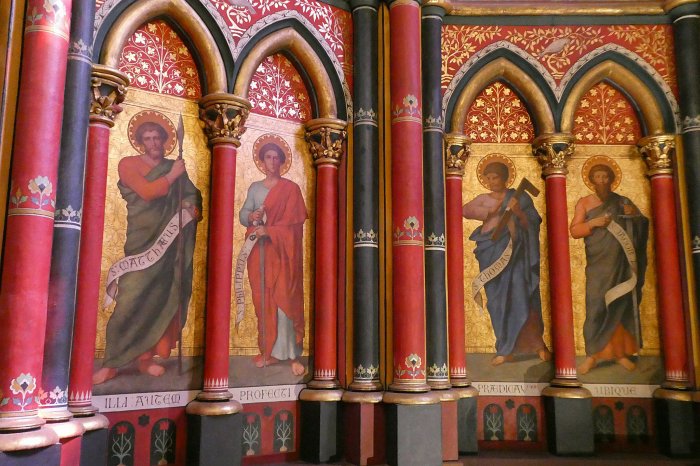 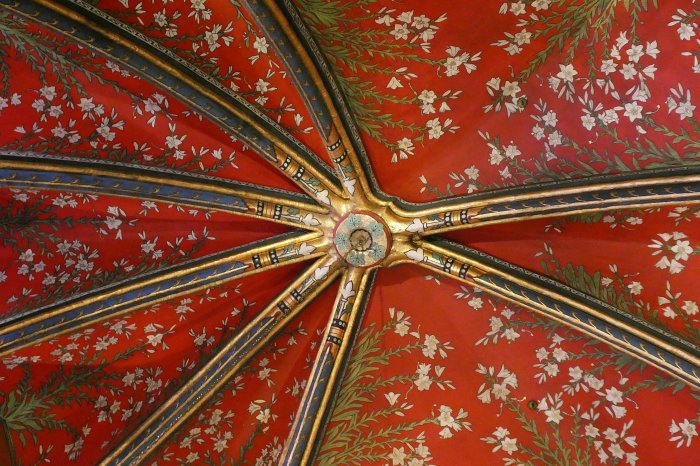 as well as some very pretty stained glass windows. There are some extravagant paintings illustrating the Stations of the Cross and overall there is a feeling af balanced magnificence. Outside there is also a very well preserved 14th Century Gothic cloister. 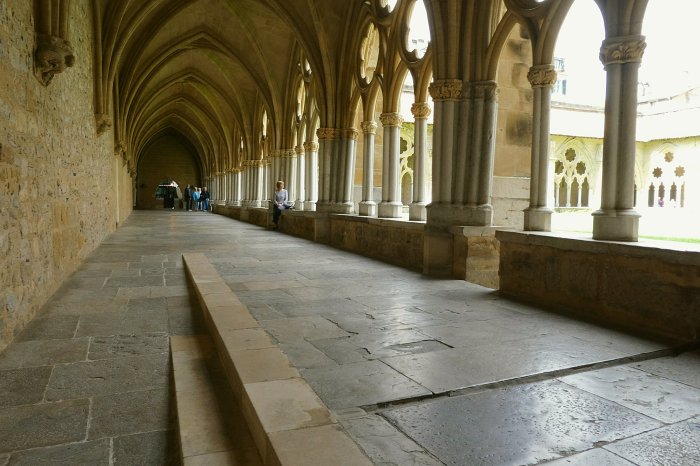 Once again the weather had started to threaten 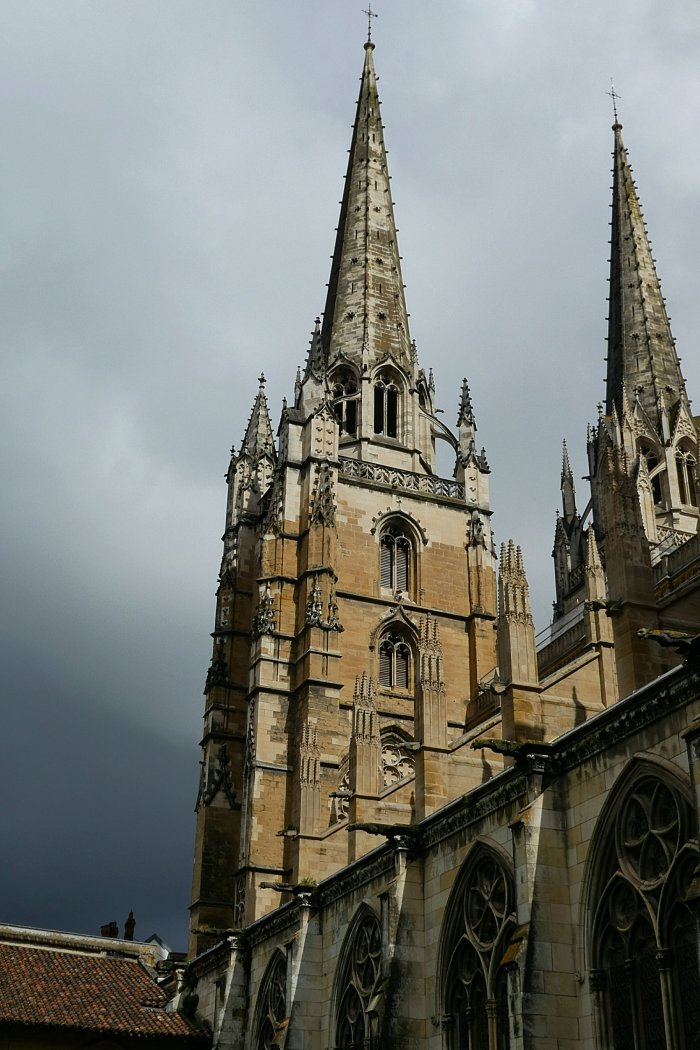 so we had a quick coffee and headed back to collect the car.

Our plan had been to drive out into the Pyrénées to take a look at the scenery on one of the Michelin Guide suggested routes but no sooner had we started up the steep, narrow, twisting road overhung with dripping branches when it started to rain again, in bucket fulls. There were obviously going to be absolutely no magnificent views to be had so I had decided to turn round at the first opportunity; fortunately for us the first opportunity was at St Pierre, where there was a restaurant.

The Restaurant Campagnard didn’t look promising, in fact it didn’t even look open. Mrs Sixwheeler heroically volunteered to investigate and disappeared into the rain, peered through a window and started gesticulating enthusiastically, I went over and we went in. I asked if they had a table for two for lunch and was asked if we’d booked; we hadn’t but they let us in anyway, as they did several other people who arrived after us. In the end there were fourteen of us which completely filled their dining room, the family were all eating in the kitchen next door.

This is a proper family run Ferme Auberge such as we’ve come across before in France and which have always fed us wonderfully and this was to be no exception. We chose the €16 menu which gave us three courses: first came the soup, a small tureen of delicious soup with potatoes, carrot, red kidney beans etc. from which we both had two bowls and could have had a third but felt we might not make pudding; secondly we had both chosen the Agneau Roti and a tray of roasted lamb chunks arrived covered in unctuous gravy and a tray of frites on the side, it was delicious; finally there was a small choice for dessert, Mrs Sixwheeler had the last slice of apple tart and I had a slice of Gateau Basque and both were excellent, thank you.

I just love it when a day is going downhill but then turns round with something like the surprise discovery of a brilliant restaurant and such a good meal. It was still chucking it down when we came out but we were very happy to turn the car round and head back to Bayonne.