Today we transferred by car from Pondi to Madurai and this should have taken about seven hours but we managed it in just a little over six including a stop for lunch. I attribute this to the excellent roads in Tamil Nadu (compared to Rhajastan) and to the skill of our driver Bala. It turns out that Bala lives in Madurai and has not been home for about ten days so was keen to see hearth and home once more.

there’s not really that much to tell about the journey, we left in one of the Pondi rush hours,

compared to other journeys we have made in India the whole of this part of the South is very green and very flat. You’re never alone here as no matter how remote the location there will be someone there. All the way along the road there are huge buildings which are schools, colleges or technical institutes, this appears to be a country wholly committed to education and investing in future generations.

Eventually, aafter being in India for two days and two and a half hours into the third we saw our first hill

this photo takeen through the car window so not very good but I was just so excited after all the flatness. High ground continued in the form of gigantic monoliths rather than ranges of hills, think Ularu/Ayers Rock type of thing right down to Madurai where there’s one that looks like an elephant which Bala informed us is known, imaginatively, as Elephant Rock.

There followed the usual bustle of an Indian city, Madurai is the second city of Tamil Nadu, and they do have some houses painted in brilliaant colours.

And finally we turned onto a private road up a hill to our hotel for the next two nights, theGateway Hotel Pasumalai which dates back to the time of the British Raj and has absolutely stae of the art fire and safety equipment.

Once we were settled in we had a walk round the very extensive grounds, the road up to the hotel has signs warning you to look out for mongooses – we saw one – and on the way back to our room sat on the veranda of the old building for a beer and were joined by another of the residents. 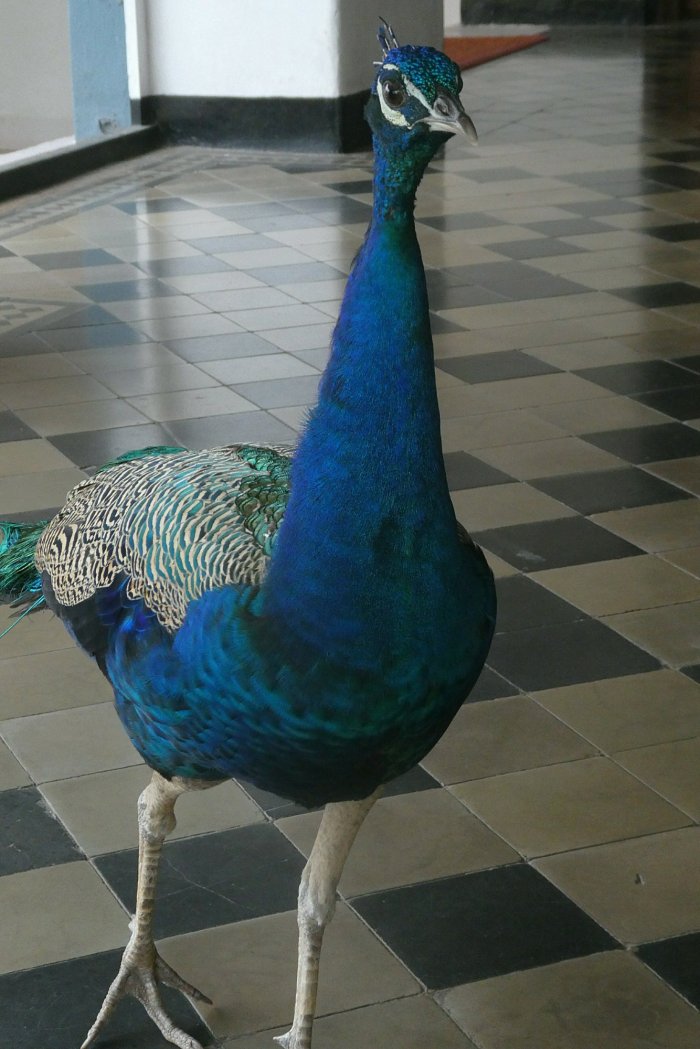 May not be ble to post tomorrow as we have an evening engagement with the goddess Meenakshi so next time may be from the Cardamom Hills.