I may offend someone here, it’s not intentional and if I do I apologise.

Wherever I go I like to visit churches. They are usually interesting, sometimes magnificent, often beautiful and sometimes moving. And on a hot day they provide shade and coolness. Oh, and I like both organ music and choral singing. So all in all churches are a good bet in my book.

Yesterday I tried and failed to get into Montpellier cathedral so today I tried again. I could hear the organ playing from outside so in I went.

I was hoping for a building that would shine inside from the wonderful dazzling light of the Midi, instead it was a bit bare and dull.

Enjoying the music I sat down at the back on some stacked up benches under the organ loft, cool and peaceful.

Before long I heard a strange noise from the front and realised that other visitors were being ushered out and that a service was starting. So I stayed put and sat right through it; it did go on a bit as it turned out to be the midday mass.

So my reflections: given this is a Catholic country and that Montpellier is France’s fastest growing city a congregation of about thirty five for Sunday midday mass must be just a tad disappointing; as someone brought up in a notionally Church of England family and educated at a Wesleyan Methodist school I can’t be doing with all this ritual – holy water, crossing oneself, bowing, genuflection and the more I see the more Methodist I incline. At least we were spared any censer swinging but the C of E needs to watch itself on that one too. And don’t get me going on all this hand shaking stuff, I’m sorry but I’m just not comfortable shaking hands with someone to whom I have not been introduced.

At one point I nearly got the giggles as I thought that someone’s phone had gone off but it was a really naff ring tone then I realised it was the priest with a bell. It would have been great if my phone had gone off as I have “Baby Please Don’t Go” by Them for my tone (Look on YouTube if you don’t know it) which would have sounded fantastic with those acoustics.

Sermon was too long in my opinion and the actual wine and bread bit was horribly under produced. Come on the Catholic Church you’re missing a trick here, get some creative production specialists in to lift things a bit and jazz it all up.

Anyway I was surprised how much of the service I could follow from my own going to church days, they’re not that different really. By the end the congregation appeared to have enjoyed the service. I had a nice chat with a charming old French lady on the way out and went off to find some lunch.

Was I converted? No and didn’t expect to be. Was I moved? No I found it all a bit dreary. Was I glad I stayed? Undoubtedly as it was a glimpse into another world and I envy anyone who does have faith. And this new Pope chappie seems to be OK.

Leaving Montpellier in the morning so on the road again as the foot seems OK; may be adrift from decent WiFi for a while but I’ll keep writing them and publish when I can. Oh you lucky people.

PS
This is for Mrs Sixwheeler as she loves these and I’m missing her, 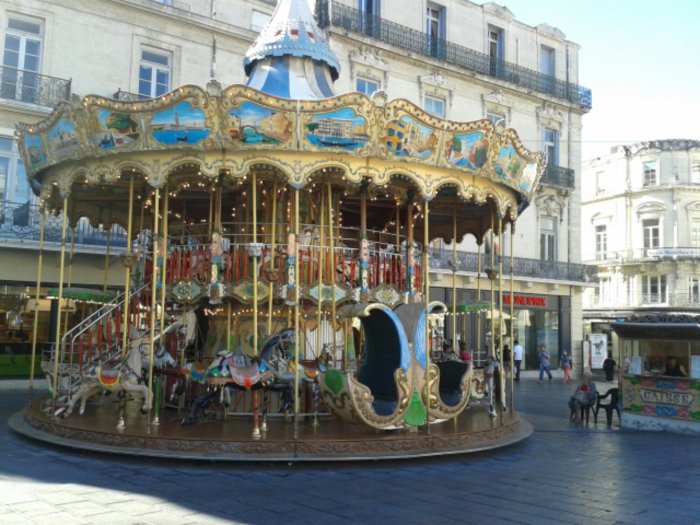 when I was a kid we used to call them ‘whirlygigs’ which is a nice word and caused autocorrect all manner of problems.