After an excellent night’s sleep we woke up to clear blue skies, sunshine and no wind; and no rain forecast until the afternoon. After last night’s storm this is a welcome change.

Before breakfast we took Maude out and down to the quay where the MV Scillonian lll was being loaded for a trip to the islands. The ship is dual purpose combining freight and passengers, and it’s a horror! It needs a shallow draught to get through the channel between the islands but has to cross a strip of sea that is always ‘turbulent’ to say the least. The Western Approaches is where the Atlantic starts to narrow into the English Channel and the seabed lifts onto the continental shelf. The result is that, like the Lord, it moves in mysterious ways; and will make all but the most ardent sailor very seasick. I know this because I’ve been on it a few times but hope never to again. As we watched it sail out in the sunshine and flat calm we chuckled about what was in store for them once they got round by Lands End, and went back to have breakfast.

After breakfast, and what a breakfast it was, we headed north to Sennen Cove. This is a lovely spot, a big bay with good sand for a dog to run about on. Here it is 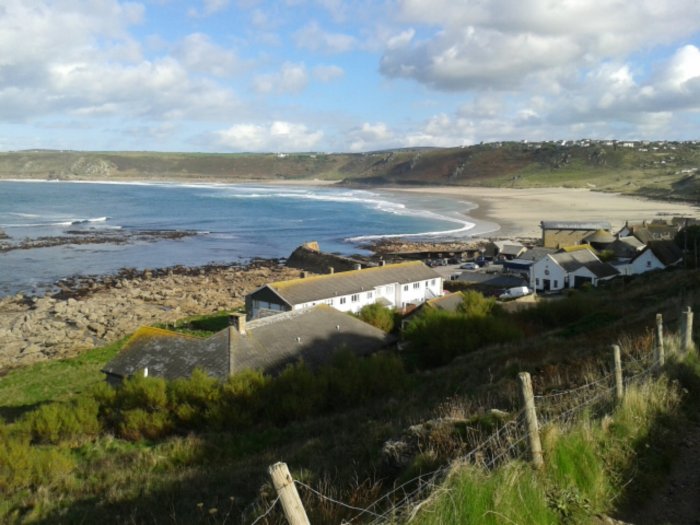 and we enjoyed a marvellous walk and Maude ran and ran so she was happy. We also walked up to the old coastguard watch for the dramatic views to Lands End and could even (just) see the Scillies faint on the western horizon.

Back to the car and along to St Just and a question; St Just always appears a bustling little town, but what does everyone do? Who knows, we certainly don’t. We pushed on to Cape Cornwall, the most westerly point on the English mainland

a beautiful place on a sunny day and always reminds me of my late Mother-in-Law who we once left sitting in the car on the steeply sloping car park while Mrs S and I went for a walk. As we left I just mentioned that the brakes weren’t too good and hoped that she wouldn’t end up in the sea. She was NOT amused!

We wanted to have lunch at the Tinner’s Arms in Zennor but it was closed as was the café in the village, that’s Cornwall in November for you, so headed back to Penzance.

This afternoon we walked in Penzance and visited the Graham Sutherland exhibition at the Penlee Gallery and walked back through the delightful Morrab Gardens.

Back at the hotel we watched the cargo ship Gry Maritha being manoeuvred into dry dock. This delicate operation (it was a tight fit) was carried out smoothly, the dock gates closed and straight away they started pumping the water out.

A bit later on I took Maude for a walk and we came round by the dry dock; my surprise it was already nearly empty. Some of the dock workers were by the gate watching, I said “that pump does a good job” and one of them replied “it’s not bad,much better than doing it with a bucket!”