At school we had a teacher I didn’t like. Actually there were several I didn’t like but this one was a particular irritation; we just didn’t get on. At all. To me he was a pain in the backside and to him I was a severe irritation. He did, however, have one saving grace; a marvelous tenor singing voice.

This was at a time when the Beatles were having their first hit records, the Rolling Stones were still making good records and the 1960s Blues Revival was in full swing. Classical music war NOT cool, it really wasn’t.

In a clear effort to show off the above mentioned teacher worked with the school choir and we were all forced to sit through an expurgated version of Handel’s Messiah; a perfect vehicle for him to feature his voice. It was as if a light had been turned on, I became a closet Handel fan. Oh the shame!

As the years passed I embraced more and more music, of every type (except for Country and Western – that’s just one step too far) and enjoyed a number of years going to the opera in London after work. Some operas I enjoyed more than other but apart from one Stockhausen I always stayed to the end; in particular I enjoyed Handel’s operas. Mr Handel wrote very long operas and I evolved my “bottom grading” for operas which states that you can tell how much you enjoyed an opera by how sore your bottom gets. If your bottom aches during an opera you’re not enjoying it, or it may be a comment on the seating at ENO at the time. And this brought me back to the Messiah.

I downloaded a “Messiah Highlights” onto my iPod and although this is a bit like one of those awful “The Best of ……….” compilation tapes/CDs it had all the best bits and I have memories of striding over various mountains and alps with this wonderful music ringing in my ears. Then I got a double CD with the full Messiah on that I keep for home when I feel the need for some uplifting music; or it’s Christmas. 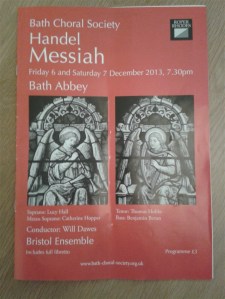 so last Friday we found ourselves at the magnificent Bath Abbey for the whole thing sung live. Mrs Sixwheeler had never been to a live concert of a classical work before so we were not sure how it would go but WOW, it was magnificent and we both enjoyed it from start to finish.

I think that this could become a regular start to our Christmas season now, just need to remember to wrap up well.