Some years ago some friends and I went for a week trekking in the Karwendel Alps in Austria. After a long first day we were forced to bail out as there had been an unexpected  big dump of fresh snow and all the trails were closed; even the guides were not going out.

Plan B was activated and a day spent returning to Innsbruck and heading down into the Stubai Alps where we installed ourselves in the Austrian Alpine Club’s Frans Senn Hutte, a magnificent and comfortable building. The end wall of the hut faces due west and there are tables and benches and following a hard (?) day on the mountains it is a lovely place to sit with a beer or two as the sun sets above the valley. 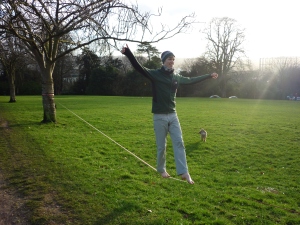 with a couple of his friends. Actually he was rather good, not only able to walk back and forth on his Slack-line but hold a conversation and make jokes at the same time. And he was happy to be photographed. Oh and that’s Maude in the background who was suitably unimpressed, but that’s terriers for you.

Incidentally the photograph at the top of The Sixwheeler Chronicles was taken that first day in the Karwendel.