In 1959 Bobby Darin had a hit record with Mack the Knife. I found the song intriguing, for a twelve year old, and it stayed with me. Later on I discovered that it was a song from Bertholdt Brecht and Kurt Weill’s The Threepenny Opera and I loved the music from that. Eventually I found out that this had been inspired and derived from John Gay’s The Beggar’s Opera written in 1728; quite a journey to get back to source.

John Gay was a satirist in the eighteenth century who wrote the ‘book’ as a commentary of the politics and social mores of the time. The music was written by Johann Christoph Pepusch a well known composer of the time who worked with Handel. But he didn’t actually write most of the music but arranged popular ballad music from the streets to fit the words. This made the production very accessible and it ran for a record breaking sixty two consecutive nights from the opening.

I have waited for years to see a production and tonight in Bath I finally caught up with it although the first production in Bath was in 1728; and in the theatre I saw it in tonight in the 1760s.

There are some vaguely familiar characters, Capt. Macheath (Mack the Knife), a highwayman; Lucy Lockett (lost her pocket?); Polly Peachum and others familiar from the song. Then such wonderfully named characters as Crook-Finger’d Jack, Nimming Ned and Sukey Tawdrey. A stage band that included a harpsichord and a bassoon. And you know you’re in for a good time with songs like ‘Virgins are like the fair flower in its lustre’ and ‘Our Polly is a sad slut’.

The cast played it, as it should be, very much over the top; the action was continuous, the music and songs terrific and the acting good. It’s strange that nearly three hundred years later some of the music is still familiar.

All in it really was a great and fun night out; it was a long road to get there, I wish I’d seen it sooner and I hope I get to see it again. 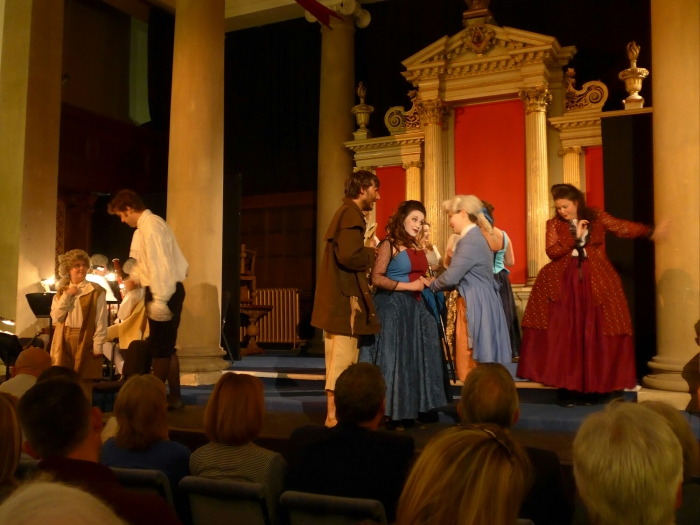