Here we are back in lovely Pen Camneves cottage overlooking the harbour in Newlyn. We had a damp and windy drive down yesterday but today dawned dry and brighter but still windy.

Before breakfast Maude and I walk down into the village to a small shack where I buy a newspaper and she gets a big fuss and a biscuit. For the fishing fleet it’s already well into their working day and they’re all off out to sea.

On the way there are lots of places associated with the fishing industry with some of their equipment being very colourful.

As it was still dry we decided to drive up to the north coast to our favourite place, Cape Cornwall.

We carefully made our way round the foot of the Cape where the waves were crashing onto the rocks before we climbed up to the Coastwatch hut for a chat with the watcher; the wind was gusting at Force 7 on the Beaufort scale.

We continued up to the top where Mrs Sixwheeler and Maude sat for a very windswept photo. 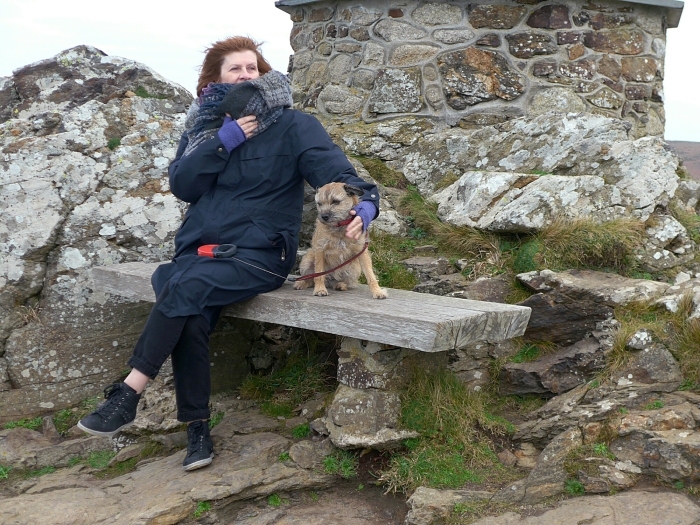 After this we dropped down to Priest’s Cove just to the east of the Cape, where the boats are all well drawn up from the slip

and looked at all the little shacks that the fishermen have built around the cove to store their gear.

This had blown most of the cobwebs away but to make sure of a good appetite we went to run Maude on the sands at Sennen Cove before making our way along the north coast for an excellent lunch at the Tinner’s Arms at Zennor. All in an excellent morning and then we headed back to do some exploring in Penzance.