Welcome to another hot and sunny day in Rome. Today we woke up again with excitement as we are spending time visiting some of the wonderful historic and cultural sites of this beautiful city, and because the Rome Times Hotel is so well placed we can easily do everything we want to do on foot. And so, suitably braced by another excellent breakfast we set off.

And once again it’s very hot, but this was part of the plan as it forces us to meander along noticing things and keeping as cool as we may. Our first stop was the famous Spanish Steps and the first thing we noticed was that they are closed for upkeep and cleaning!

But, hey, they’ve got to be cleaned sometime and at least we’ve seen them and it was something I missed on my last visit in 1965.

So we moved on. This area running down the Via dei Condotti is the place to come for serious shopping, the eagle eyed among you may spot Mrs Sixwheeler lurking in this picture outside Dior. Some hope! 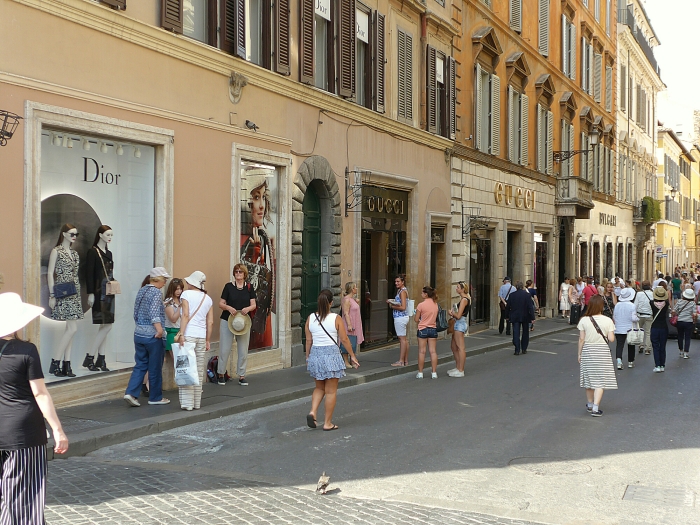 In the picture you can also see Gucci and Bulgari and that’s what it’s like, both sides, all the way down. Each establishment has it’s security men inside and out and, I guess, if they don’t like the look of you, you don’t get in. The further down the street you go it gets a little more downmarket as you get towards Swarovski but I guess these things are relative. Anyway it was a view of something different at the end of which a coffee was in order; from the price of it I think that I now own Brazil, do come and enjoy my Olympics this summer.

Onward now through a maze of side streets to the Pantheon. 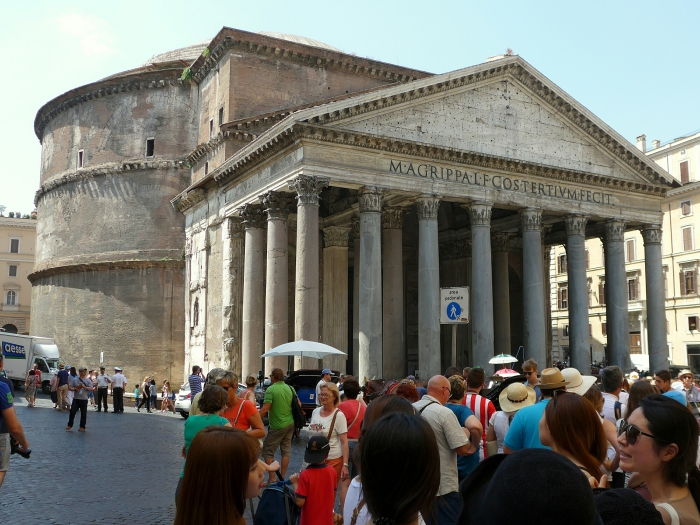 This magnificent building is on a former pagan temple but was built by Marcus Agrippa but converted into its present form by the Emperor Hadrian, he of the wall. The columns at the front of the building were quarried and carved in southern Egypt and shipped to Rome complete, wow. You can tell we had a guide! It is a magnificent and interesting building, I’m not going to bore you with too many pictures but this one is of part of the interior which is beautifully decorated and also gives you some idea of the crowds. 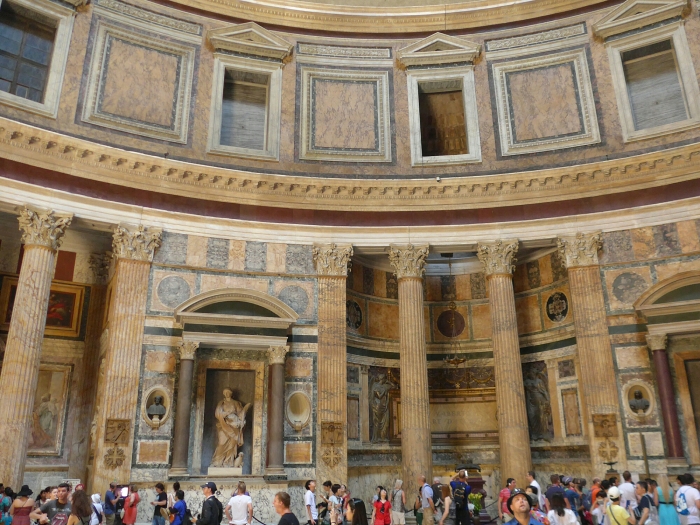 The Pantheon has an enormous dome and one of the reasons that they could build this is because the dome is actually very light as it is made from pumice, so if you’re ever suffering from rough skin on your feet in Rome just shin up to the roof of the Pantheon. See what useful things are here. In the centre of the dome is an open oculus which is simply to let in the light as there are no windows and immediately below is a drain in case it rains; here is the oculus with the light streaming in.

There are some celebrated tombs here too, principally that of King Victor Emanuel II who unified Italy in the late 19th century and of the painter Raphael. All this was a great deal to take in so we went for some lunch.

The last thing on our hit list for today was to visit the Trevi Fountain and throw in some coins to make it certain that we will return to the Eternal City and it just happened to be on the way back to the hotel. Soon we encountered yet another huge crowd but turned a corner and there it was, surrounded by fencing as it is being cleaned and refurbished; so even without the coins we’ll have to come back to see both things properly with normal access. Anyway here it is.

Do look at the posture of that security man, he’s really fed up as people were still trying to throw money into the fountain and he kept yelling”Stop throwing money” but I have a faint suspicion that some very naughty people might just have been ignoring him.

By now we were a bit sore of foot so slowly made our way back for a rest before dinner.