It turned out to be one of “those” nights. A gentle walk from the hotel and back, a nice dinner and an early night, but, before going to sleep I wrote my blog. It was witty, it was erudite, it had wonderful pictures to illustrate what I had said, and… when I pressed the publish button it all disappeared into cyberspace. I muttered darkly and went to sleep.

Fast forward to the small hours of this morning, I woke up and did it all again but I’m sure not as well. And went back to sleep.

Breakfast at the Rome Times Hotel is a thing of joy. There’s a good choice of all the usual continental offerings: cereals, breads, meats, cheeses etc. there was also scrambled eggs. Not your usual hotel scrambled eggs but scrambled eggs nearly as good as Mrs Sixwheeler’s scrambled eggs; but not as good, obviously. And bacon. And good coffee. So the day started well and so feeling refreshed we set off.

The plan for today was to take the Rome City Sightseeing Bus which offers a hop on hop off service round the major historical places, and they are open topped too so that you can get sunburn as you travel. They are a very good way of getting the feel of a city. We had a short walk to the nearest point to get on the bus, bought tickets on the way and waited, after about five minutes the next bus arrived but the top deck was full so we sat downstairs and moved up as people got off at the Coliseum. The biggest drawback of this type of trip is that you’re at the mercy of the traffic, which was horrendous.

Anyway Rome is famous for historic buildings so here are some random ones from the bus.

Now a museum but in its day this was the fascist headquarters of Rome, with the “Mussolini Balcony” above the entrance. And finally the Castel sant Angelo from where I seem to remember that Floria Tosca tossed herself off to avoid the advances of Scarpia at the end of the end of Puccini’s opera Tosca.

And so having made one complete circuit we stayed on the bus round to Castel sant Angelo for the second time and walked the short distance to St Peter’s Square at the Vatican.

I have to say something here; we had decided not to visit any of the well known attractions in the Vatican as we really didn’t have the time, however, absolutely everything in and around St Peter’s is horrendously overpriced, there are queues for everything and you pay mightily for everything, talk about the money changers in the Temple; I found it all very uncomfortable. Anyway, here’s St Peter’s and if you look closely you can see the queues. 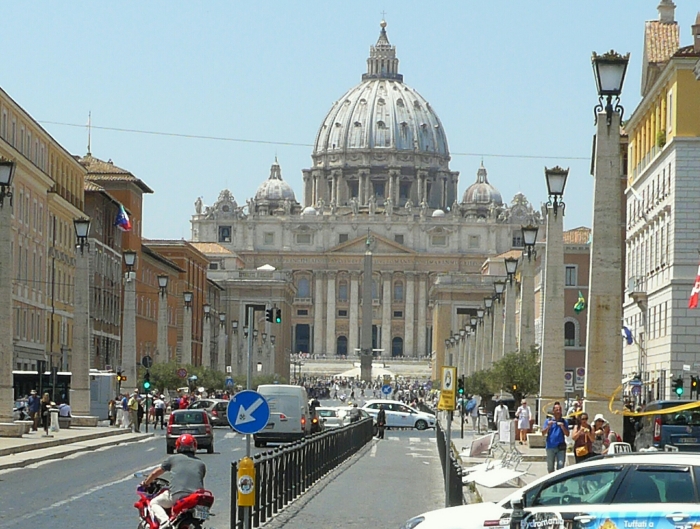 Inevitably it’s the side streets that provide interest with some amazingly coloured buildings like this one.

When we eventually got back to the hotel we were hot and tired but that was soon sorted by a shower and rest before we set out for dinner. Yesterday Mrs Sixwheeler had spotted a bar/restaurant called Brazilia that she liked the look of so we went there, we were made very welcome, the food was amazing and they were playing wonderful music from the 1950s and ’60s which, curiously we seemed to know most of the words for. As there didn’t seem to be any obvious Brazilian connection I was about to ask when I noticed that it’s actually called Bar Zilai, a Zilai being Italian for a small wooden cask, just as well that I checked! Anyway they will be getting a really good TripAdvisor review when we get home.