Last night we had been promised rain, high winds, floods and the first day’s play in the final cricket test match against Australia from Sydney. It certainly rained and blew but in our part of Bath (beautiful city of) but thankfully we are sheltered. I watched the news this morning and my thoughts go out to all the poor souls who are flooded. They were right about the cricket though, it was dreadful. Again.

We were planning to go into town this morning but then suffered another downpour of biblical proportions so had coffee and drove to Keynsham to the supermarket. On the way home I stopped and took a photo  from the Bristol Road looking along the valley towards Kelston Park. Quite nice light and a small flood, not too bad.

After lunch the sun was sinking so I took Maude for a walk. I had better introduce Maude as I’m certain that she is going to feature regularly in this project. Maude is an unbelievably cute Border Terrier who enjoys sleeping and walking but hates squirrels with a passion. More than anything she loves meeting people. This is Maude, asleep as usual. 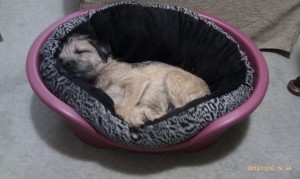 We’d not been walking long before it started pouring with rain but we are ‘rufty tufty’ walkers and pressed on. Reaching the Cotswold Way national path which runs above Weston it had stopped raining, the light was brilliant and I was able to capture this view looking across Weston to Beckford’s Tower and the tail of a rainbow at Lansdsown, which pleased me. 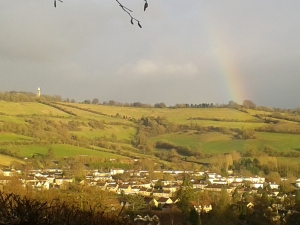 Your picture for today.